Darcy Burke‘s got a secret…by day, she’s a mom, but by night she is a bestselling author of the Secrets and Scandals series set in regency England. I first met Darcy a few months ago, but it wasn’t until I started to seriously consider self-publishing that we really got to know each other. Darcy has helped me so much in understanding the indie world, and now has out three full-length novels and a novella. I was lucky enough to get to beta read for Darcy’s latest, Never Love a Scoundrel, coming out on May 15th. Never Love a Scoundrel is one of my favorite books now–one I definitely want to read again when it comes out.

Welcome to the tearoom, Darcy!

Thank you for having me!

Can you tell us a bit about your Secrets and Scandals series?

It’s about secrets and scandals. I kid! I love me some good scandal and so there’s lots of it, or threats of it, running through all of the books. The books are loosely connected in that characters appear in multiple stories, but the series doesn’t need to be read in order. I do think the last three books work best in order, but mostly because the events happen in pretty rapid succession, especially in the last two. All of the books are available except the final installment: Scoundrel Ever After, which will be out in the fall. 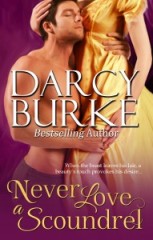 Thank you! Never Love a Scoundrel is a great story because it’s about an unlikely hero and heroine. I’d introduced Lydia as a sort of “mean girl” in His Wicked Heart, never imagining I’d write her story one day. Then she appeared in To Seduce a Scoundrel and I began to get a feel as to why she acted like she did and I wanted to tell her story. Since she was so obsessed with gossip and scandal, Lockwood seemed the perfect hero for her. He hosts notorious vice parties—it doesn’t get much more scandalous than that!

The scenes at Lockwood’s parties were definitely a highlight. What’s next for you? Any great projects on the horizon?

The last book of the series of course, Scoundrel Ever After, which is about the baddest boy of them all, Jagger. Audrey’s the perfect foil for him. And secrets! She’s got plenty. J It’s going to be so fun! That’ll be out in the fall, hopefully around the first of October.

Also in October, I’ll be in a Christmas anthology with two fabulous writers (who also happen to be my friends and critique partners), Erica Ridley and Emma Locke. It’s going to be a great trio of novellas—a Regency-set historical, a contemporary romantic comedy fantasy, and a straight contemporary, which I’m writing. There will be something for everyone. My novella is actually the prequel to a contemporary series that I’ll be working on next. I also have a new Regency-set treasure-hunting series that I’ll start after the new year.

That sounds great! Any advice for others thinking about self-publishing?

The best advice I can give a writer who’s looking to self-publish is to create the best product you can and thoroughly educate yourself. At this point, there are a ton of wonderful resources available, so there’s no reason not to be able to learn about all aspects of the business of self-publishing. I’m an author, but I’m also an entrepreneur because all of the business decisions fall to me. That’s both daunting and exciting. I really love the freedom I have to write what I want and produce it in the way that I want. I love that I can wrap a book up this week and know my readers can enjoy it next week. Above all, I urge those interested in self-publishing to be as professional as they can be—both in their production and in the way they approach their job, because it is absolutely a job. And it’s a job I adore!

What is your writing process–are you a plotter or a pantser? Do you do an outline before you start writing?

I’m both—a plantser. I used to do plot boards (and even gave workshops about using them), but haven’t for a couple of books. I still plot out turning points and write to those so that I know where I’m going. I couldn’t be a total pantser—I have to be able to see an arc, both for the characters and the story. I just wish I had a repeatable process! Maybe then I could write a little faster. 🙂 I’m actually doing a scene by scene outline for Scoundrel Ever After. We’ll see if that’s a process that’s successful and repeatable!

And the question we ask everyone who visits the Tearoom: if you were trapped in a burning building and could only save 5 books, which would you choose?

1) Harry Potter and the Deathly Hallows (though Prisoner of Azkaban and Goblet of Fire are a close 2nd/3rd) because I just love the series and I can only pick one because I only get 4 other books!

2) Almost Heaven by Judith McNaught because there are multiple scenes in that book that I will never, ever tire of reading.

3) Shanna by Kathleen Woodiwiss because Ruark Beauchamp is simply too good to be true.

5) My grandmother’s scrapbook from the 1920s and 30s. I know that’s kind of cheating, but I would hate to see it burn. It has fantastic pictures of Hawaii before it was a state, a cross-Atlantic trip to Europe (with waves practically crashing over the sides of the ship), and so many amazing pictures of my dad’s family.

Awh, that’s so sweet. I’ll have to add your other books to my to be read list too.

To one lucky commenter, Darcy will give a copy of any of her backlist books, paperback or e-book (winner’s choice). This is a giveaway you don’t want to miss out on!

19 thoughts on “Secrets and Scandals with Darcy Burke”